Several countries, including Sweden, decided against a total lockdown of the population. Even now, Swedes can decide by themselves if they should stay home or pursue their business as usual. The rationale behind this approach is economic, although it allows individuals to participate in the fight against the virus, at their own scale. It can be thought of as a decentralisation of decisions and agent based modelling, which is the technique used on this website, is often used to deal with this kind of question.

Recommendations given to the Swedish population are the following: 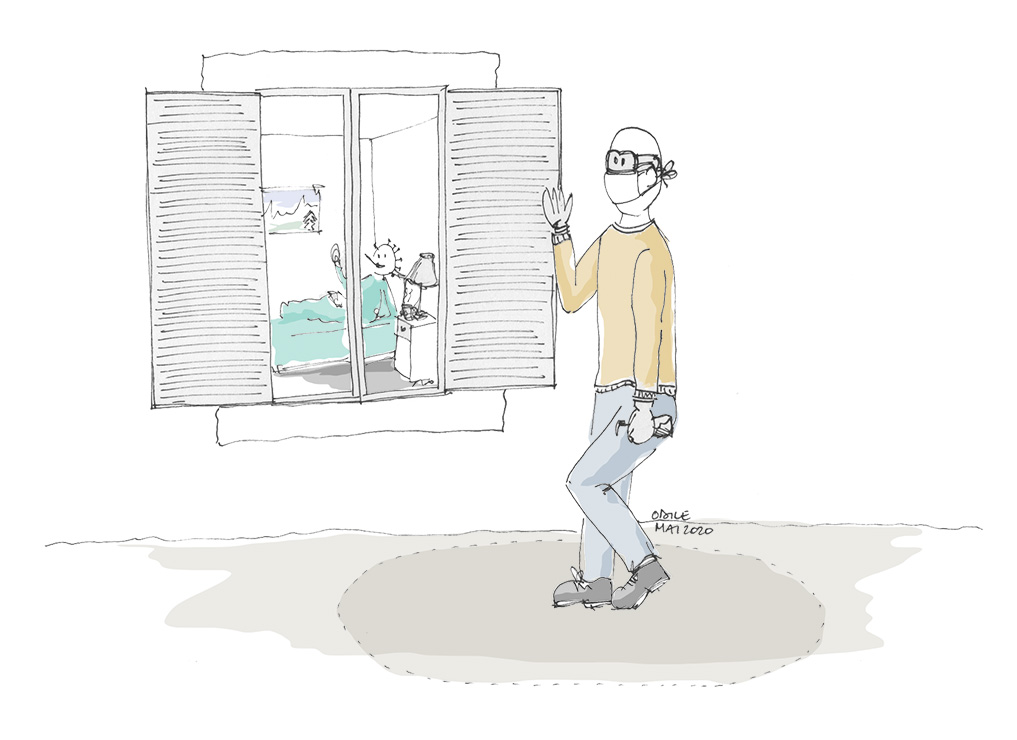 In order to implement such a policy, two prerequisites have to be met, and they are not universal: first the population has to know about the symptoms of COVID-19, even in its mildest form, so that each person can decide if they suspect they have been infected; then each worker has to trust the State’s support to negotiate the possibility to work from home or be on sick leave whilst access to a doctor is not always immediate.

These prerequisites allow us to assume in our model that individuals are really autonomous in their behaviour management.

Presentation of the model

The model is based on the one presented for question 6, where the lockdown mechanism has been adapted to include the possibility of a targeted lockdown. The population size has been upped to 1000: this makes the model less readable visually but it allows to observe more phenomena on the long run. The transmission mechanism has also been slightly modified. A final modification is that each agent is considered to be immune (after having had the virus) and does not have to stay in and can resume their life as usual.

At the beginning of the simulation, there is a unique infected agent: “agent zero”. Each day, an agent has up to three interactions out of the house and up to one interaction per person at home.

A “reasonable” agent is an agent whose interactions are less contagious thanks to basic protective measures and who goes into quarantine while they fall sick - they will therefore only be in contact with their household.

We can now test this model

Let’s start by testing the model with two extreme situations: with no lockdown at all (which allows to highlight the basic epidemic curve) and then with a perfectly followed set of rules where all agents use basic protected measures and go into quarantine upon their first suspicion of being sick.

Illustration - The situation of no lockdown. Infected agents who seem to appear spontaneously at the middle of the image have been contaminated at home, by an agent from their household. 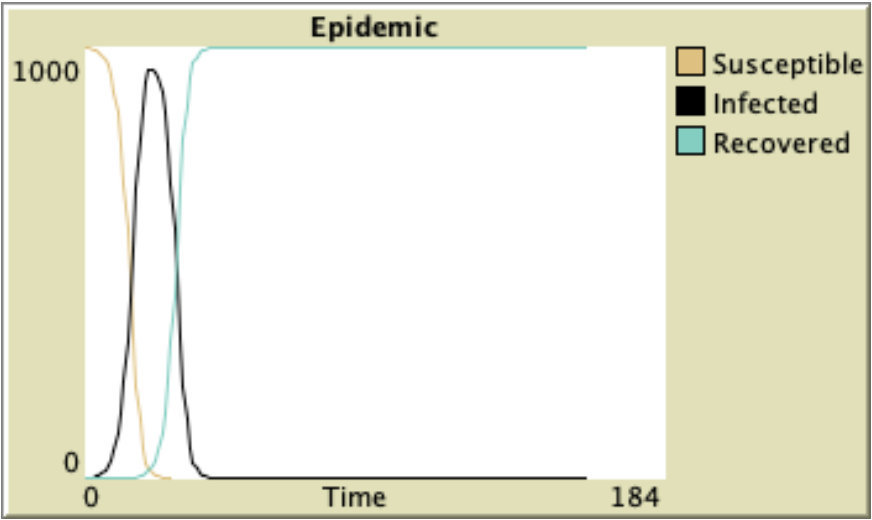 The situation of a lockdown and 100% of reasonable agents is not shown here because then the disease does not spread. Indeed, “agent zero” goes into quarantine immediately and so do the members of their household, leaving the epidemic to die down. This holds true only if we assume that agents can recognise the disease as soon as they become contagious (see infra).

Now imagine that not all agents are reasonable: let’s see what could happen if only 80% of them were. We discover a subtle situation: if agent zero (the first to become sick) is reasonable, then there is no spreading. On the contrary, if agent zero is not reasonable, then the epidemic starts but spreads slower than if no quarantine was put in place. We notice that during the epidemic, a large number of agents keep working, and that if we manage to create a herd immunity where the number of immune people is higher that the number of susceptible people, then the epidemic flattens quite rapidly.

Illustration - When we reach 85% of reasonable agents, we see that a small difference in proportion transforms the dynamics significantly and drastically reduces the number of people affected by the virus in the course of the epidemic.

Things are not as simple as that though. One of the most complicated aspects to manage with COVID-19 is that it is hard to recognise, even for reasonable agents: they don’t always know that they are sick. This happens because the incubation period can last several days and also because a large number of cases are asymptomatic and hard to interpret. When they ignore their level of threat to others, “reasonable” agents use basic protective measures but stay active. In the model, we will assume that agents do not realise straight away that they are sick. We can see the impact on the curves.

Illustration - Diffusion curve of the epidemic if the disease is too discreet to be perceivable by the agent for 1, 4 or 7 days (from left to right).

With 100% of “reasonable” agents, the targeted lockdown stops the spread of the disease (in the model) even if agents stay asymptomatic for several days. From a delay of 7+ days between infection and first symptoms, the disease will spread even with quarantine:

With 85% of “reasonable” agents, we see that the epidemic can spread in the population even when the delay between infection and first symptoms is only of 1 day:

A remaining question is that of the possibility of a delay between the start of the epidemic and the reaction from the government with any lockdown or quarantine. Such a scenario is plausible with insufficient anticipation. We notice how this delay might become decisive for economic activity, the speed of transmission and the total number of infected agents.

Illustration - 85% “reasonable” agents with no delay between infection and symptoms, and quarantine recommended immediately, or after 7, 10 or 14 days.

NB: Much like our own day, a day in the model corresponds to a set of interactions that an agent can have outside or inside their household. However the analogy stops here since a week in the model cannot be compared with a week in the world we know. What matters here is to explore the impact of the timing of a targeted lockdown on the dynamics of the epidemic and the economy..

Finally, we have to recall an essential hypothesis of the model, the effect of which is only visible at the macroscopic scale. Part of the behavioural rules of the agents is that they come out of quarantine once they are fully recovered. Regarding COVID-19, it seems a lot simpler to identify the end of the disease compared to its start - we can therefore assume that agents will be able to detect when they are recovered. This has a significant impact on the spread of the disease. We can understand this as a decrease in potentially contagious interactions: if immune agents come out of quarantine, susceptible agents have more opportunities to have safe contacts than if recovered people had stayed home. Each interaction therefore has less chance to be a contagious one. 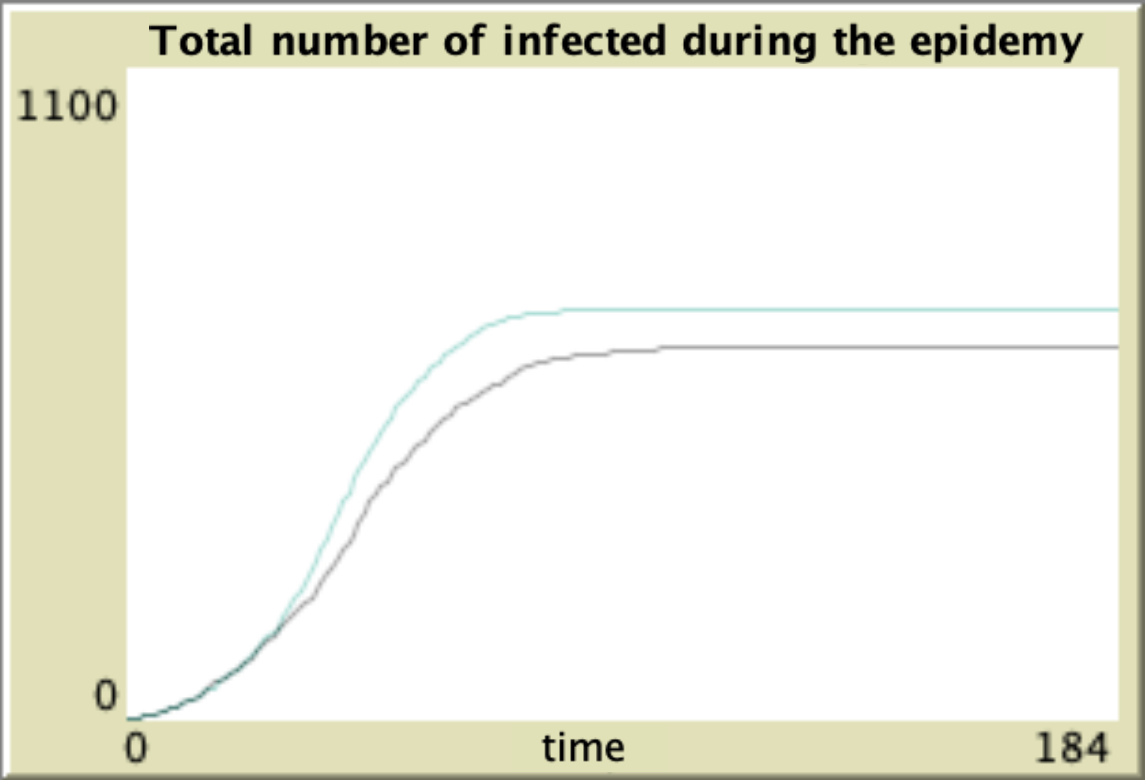 To conclude, we note that it is theoretically very simple to mainly contain an epidemic with a targeted lockdown, even when the disease is not easy to detect immediately. Nevertheless, the number of completely asymptomatic patients of COVID-19 and the incubation period (which is not perfectly known to this day but seems to last up to 20 days) should be taken into account if we wish to better model and understand the current epidemic. We could imagine more systematic testing to reveal infections, which would probably require the household and colleagues of someone visibly sick to go into quarantine. This simple model can however illustrate this political option, and show that it prevents a relapse of the disease at the end of lockdown, as it is feared will happen after lifting a total lockdown.

If the simulator window appears truncated, just zoom out.

Simulate the impact of a targeted lockdown