In a recent article on his blog Sciences2 (in French), scientific journalist Sylvestre Huet reports on the results of a scientific study run by an international team and published in Science.

This study allows us to better understand how China tried to contained the epidemic on its territory. A particular point is highlighted: cancelling all travels has enabled to limit the expansion of the epidemic.

Even though the epidemic data published by different countries have to be taken with a pinch of salt, the hypothesis is not completely crazy. After all, air travel is known to be the main vector of human epidemics, so why not?

Let’s see how this works.

Imagine three cities, connected together by air travel. Each of these cities has its own epidemic situation, which can be characterised by stocks of population: for example healthy (in green), infected (in red) and cured (in blue).

During the epidemic, each city will see its epidemic situation evolve endogenously, depending on the interactions between its own residents and the local measures implemented to fight against the epidemic.

When air travel is maintained between these three cities, the virus can spread from one city to another, via the travellers. The epidemic situation in each city therefore also evolves exogenously, depending on the airway connexions with other cities and the evolution of their local epidemic situations. 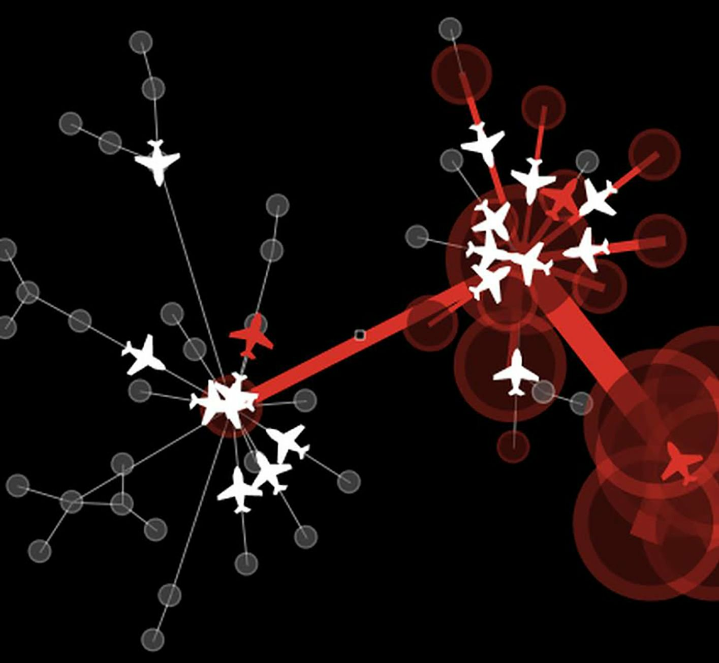 Several elements will affect the transmission speed of the virus in this system of cities connected by airways: the number of travellers and the frequency of departures and arrivals of course, but also the size and epidemic situation within the different cities for example. Maybe unexpectedly, the structure of the air travel network and the position of infected cities in this network are also crucial factors.

Therefore, as long as the virus is confined to the periphery of the network (in nodes weakly connected to the network, such as regional airports for example), the spread of the virus will remain slow. By contrast, as soon as hubs are affected (hubs being the nodes which connect a large number of other nodes, large international airports for example), - and especially if such hubs have a central position in the network - the diffusion of the virus accelerates considerably: it is allowed to spread over large distances and to reach every node in the network. Once launched, the dynamics cannot be stopped, hence the necessity to close down hubs in priority, but also alternative routes, in order to avoid traffic being rerouted to secondary links.

The decision to stop air travel has a considerable cost, both economically and politically. However, if the decision is made early on, focuses on airports which are the most susceptible to spread the virus from its original source and if it is coupled with other measures, then it can play an efficient role in managing the spread of the virus to a circumscribed part of the air travel network.

At the scale of the world air travel network, mitigating the risk of a virus as contagious as COVID-19 travelling over the network would have probably required more radical measures: for instance stopping almost all flights from the start of the epidemic. Only time will tell if that was worth being given a shot.