The concept of anthropocene was developed in the natural sciences and reappropriated by the humanities and social sciences in a more critical and political perspective. There is no consensus in the scientific debate. However, the general idea is that the Earth has entered a phase of its evolution which is irremediably determined by human activities that impact geological and climatic history. The beginning of this period is still largely debated by researchers. Did this start with the industrial revolution? With the first nuclear trials?

In the question, the use of the anthropocene concept seems to refer to the way human beings organise their habitat as well as the impact of their activities on Earth. With regards to COVID-19 and previous pandemics, there are several elements that we need to consider in order to understand the emergence and spread of these viruses. 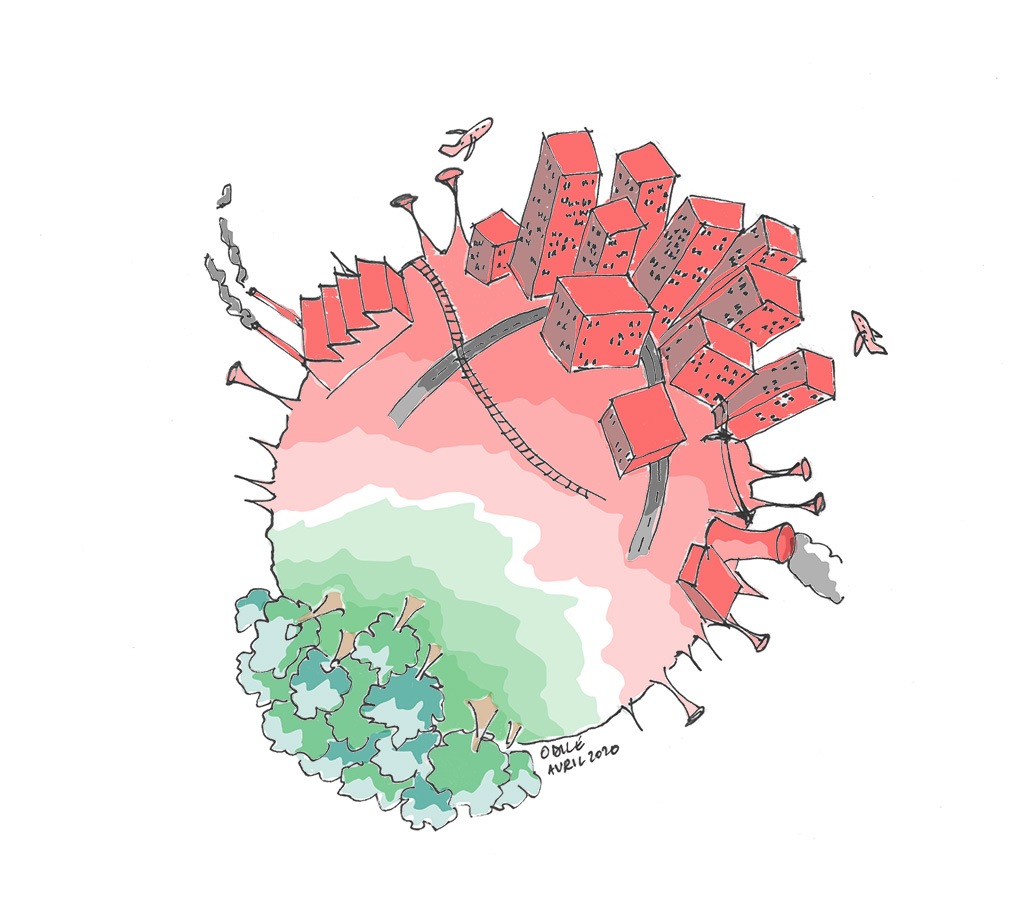 The general mortality dynamics of populations at the global scale is not linear in time or space, but it is characterised instead by catch-up phases and breaks in variable rhythms. While noting a strong trend towards an increase in life expectancy at birth since the end of the 20th century, especially after WWII for a majority of the world population, we also notice breaks in this trend which coincide with the appearance of new diseases and forms of resistance to known diseases. The second half of the 20th century has seen a reduction of infectious, parasitic and deficiency diseases - at various speeds depending on the world regions - and by the appearance and identification of 1/ new pathogens (HIV/AIDS, viral hemorrhagic fever like EBOLA for example); 2/ former pathogens we thought were highly contained, if not eliminated, which have mutated (cholera 0139, multidrug resistant tuberculosis…) or whose expansion area has changed (insect-borne viral diseases such as dengue fever or yellow fever).

The causes for the emergence or re-emergence of pathogens are diverse (resistance to anti-infectious drugs, abandonment of health campaigns, reduction of vaccination…). The ones that are linked to transformations and developments of environments by humans are crucial (urbanisation, new modes of land use, actions on ecosystems and the climate…). These changes imply on one hand that pathogens, hosts, and vectors adapt one way or another to such new environments, transformed or built, and on the other hand, that the probability of interactions increases between wild and domesticated animal species, but also with humans.

The role of these transformations in pathogens crossing “the species divide” (from animal to man) is essential but it is also important to understand how they vary in time and why they spread geographically. For example, the Ebola hemorrhagic fever epidemic has occurred brutally and sporadically in parts of West Africa since 1976, when it was identified. Almost 30 years later, in December 2013, it spread wider and more regularly to specific regions of Africa, including in cities.

In general, the diffusion depends on the possibilities of movement by vectors and reservoirs, may they be animals or humans, and of their interactions. Some vectors like the mosquitoes take advantage of air or maritime transportation to settle outside of their regions of origin. They can also benefit from more favorable environmental conditions, including in other regions of the globe because of global warming.

With diseases where man is the vector, like the flu or the coronavirus, two factors are decisive geographically. Firstly, it is important to understand the organisation of circulation routes and the actors using them because they both play a role in connecting places. Secondly, it is necessary to identify how populations and settlements are organised: are they dispersed? Concentrated? Do people live in large global metropolises? In enclaved territories? These questions imply that differences in density and mobility (high or low? Over a large/small distance?) have consequences on the probabilities of interaction between places.

One of the most cited examples in the scientific literature is the appearance and diffusion of the “Black” plague in Europe between 1348 and 1352. It illustrates the importance of circulations along continental routes in the Middle Ages between Asia and Europe (Silk roads) and along maritime regional routes (Black sea and the Mediterranean), as well as fault lines and command centres of political and economic powers such as the Mongol Empire and its role in the development and strengthening of relations between Europe and Eastern Asia. The second pandemic of cholera (1829-1837) starting from South Asia (Bengal region), shows the intensification of connexions between places which has happened in the 19th century because of how large colonial empires (the Russian, Ottoman, British Empires…) expanded their maritime and railway networks, in rivalry and conflict with one another. Indeed, the pandemic started from colonial ports and then spread to hinterlands. It flourished with the acceleration and expansions of conflicts.

What about the COVID-19 pandemic? Even though it is too early to give a final explanation given the many unknowns about the disease, we can formulate a hypothesis about the conditions under which the virus was introduced. The potentials for circulation and diffusion seem to be higher in places which combine a high accessibility (1) and a high connexity (2). Several arguments are in favour of this hypothesis. The first one regards to the characteristics of the Hubei province and its capital city Wuhan: a large industrial Chinese centre and a flagship region for the economy (within the “Go West” programme of the Chinese government), with a large number of foreign companies (automobile, high-tech and biotech, steel industry, chemicals…). The region also stands in a central position inside the Beijing – Shanghai – Guangdong/Hong Kong triangle which serves more than 400 million people; it is a logistics platform located at one end of the large continental and maritime project of the “New Silk Roads” supported by China and other Asian countries.

It is in this economic and industrial hub of international influence, with a high development potential and therefore large environmental transformation, that the first COVID-19 victim was identified.

The second argument reflects the role of air travel. Wuhan is an important hub which has direct connexions with several larger capital cities in East Asia, the Middle East, Western Europe and North America. These capital cities’ hinterlands have served as gateways of the pandemic with airports acting as crossroads for the spread of the virus. The third argument is that among the first confirmed positive cases (the “tip of the iceberg”), many resided, were in contact with or worked in the centres and peripheries of large metropolises, and especially in places which host and connect the activities of the global production chain: the peripheries of Milano in Italy, of Seattle in the USA, of Munich in Germany, of Incheon in South Korea, of Mumbai in India, of Sidney in Australia, of Durban in South Africa…

These regions all have a very high potential for economic development linked with international investments. Among the first confirmed cases, many were very internationally mobile individuals who had circulated in affected areas (Hubei in China, Lombardy in Italy, the Qom province in Iran…). These individuals were, additionally, part of generally large social networks spread over large distances. Therefore, once they got infected, they contributed to the accelerated diffusion of the virus worldwide as well as the multiplication of local transmissions.

All in all, the high connexion of places has facilitated the spread of the virus at the global scale and has accelerated its diffusion in territories particularly well connected and accessible at the regional scale. This general dynamic has furthermore been amplified by various events: religious gatherings (in France, India and South Korea for example), folk festivals (the carnival in Germany), political rallies as in Spain and tourism in Austria. All these events both accelerated the local rate of transmission and spread the virus to more distant places.

The COVID-19 pandemic highlights the complex interactions between pathogens and fauna, land use changes, resources, human activities and mobility, even though these transformations have not suddenly appeared in the last 150 or 50 years. Plagues, cholera, flus… have tagged along throughout the human history of exchange, although the rhythm of environmental change and epidemics is faster nowadays. For some, the frequency of epidemics will inevitably increase as a consequence of the acceleration of alterations on the climate and the environment. To conclude, asking if COVID-19 is a disease of the anthropocene amounts to question the political responses that governments will make after this phase of crisis management. Some scientists worry already about the devastating effects that this crisis will have on the climate. Will sustainable development measures be slashed in order to prioritise the economy, with a renewed boost of fossil energy and a renewed pressure on natural resources? What will the political response be to the social and geographical inequalities that the epidemic reveals?

(1) It represents the availability of transportation options to connect places

(2) In a transportation network, places are well connected to one another.