Under certain circumstances, it could indeed work, since “less contacts with contagious people = less virus transmission”. In practice however, nothing guarantees that such a strategy works in all situations.

Let’s examine how this plays out in our simulation. Imagine, for a start, that we could identify infected people and therefore avoid contact with them (Simulation 3a: Be brave, run!). 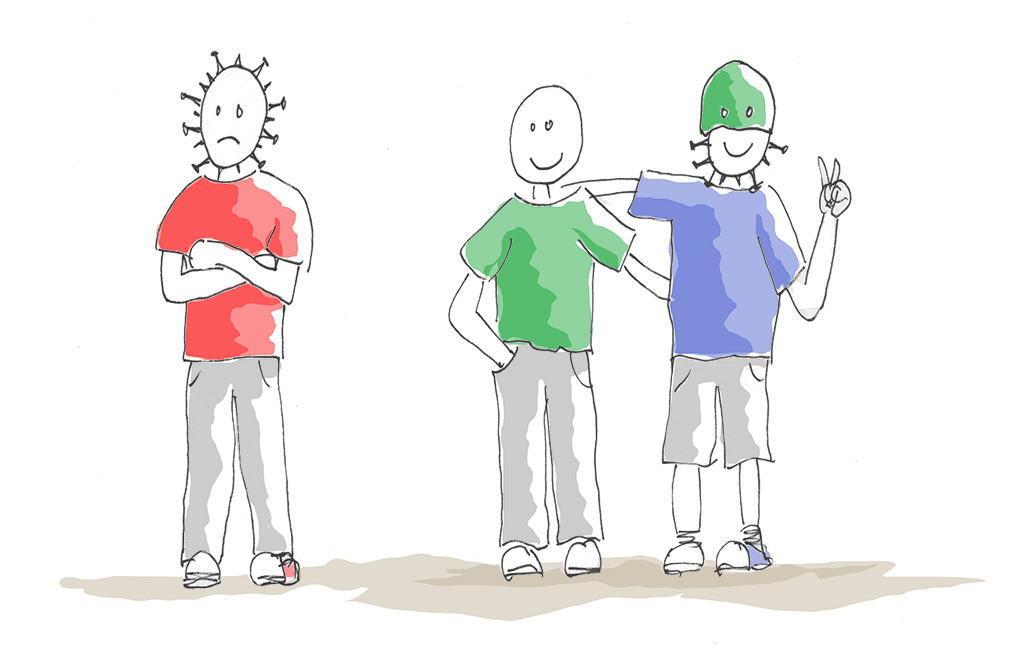 In this ideal scenario, the transmission of the virus is contained and the epidemic is restricted to the person originally contaminated. However, it would be careless to assume that this simple avoidance rule is the solution!

Imagine for example, a packed nightclub where contagious people suddenly join the dance. The situation changes very quickly! (Simulation 3b: Murder on the dancefloor)

Of course, if infected people were responsible and decided by themselves (or with some encouragement) to self-isolate, we could avoid a scenario like this. Nevertheless, the avoidance-of-infected-people strategy, although apparently obvious and common sense, is not as effective as one would imagine, for two reasons at least.

Firstly, not everyone can maintain a distance from infected people. Consider the healthcare workers, or families of people whose symptoms do not require hospitalisation for instance. In these two cases, greater protective measures are their best defense, but experience has shown that this is not a flawless approach.

Secondly, some people can carry the virus and be contagious without being aware of it. There are still many unknowns, but several scenarios are plausible. Some people can be in the incubation period, which is to say that they have yet to develop any symptoms of the disease, but they are already contagious. Some can also be “healthy carriers” or “asymptomatic carriers” of the virus and therefore showing no symptoms because the viral charge at transmission was too low or because their immune system’s response was appropriate. They can also show such subtle forms of the symptoms that they go undetected by standard screening methods for the virus. Finally, some people can also ignore their condition because they are uninformed or ill-informed, or because their medical diagnosis was incorrect.

What matters in the current epidemic is that a high degree of infected people are estimated to fall into this category, even in France. This is both good news and bad news. It is good news insomuch as it leads us to relativise the danger potential of this virus and contributes to the creation of our herd immunity, which is absolutely necessary. However, it is bad news if the peak of the epidemic is still in front of us, because it implies that the virus spreads at a faster pace than expected: unlike infected people who are aware of their condition, those who got infected without knowledge of it are less likely to take adequate protective measures for themselves or those around them. Confirmed cases become the trees which hide the entire forest.

Let’s examine the consequences in our simulations. Imagine that half of people who are infected are not identified as such (in blue) for one of the many reasons detailed above. Even if they were less contagious than people who are infected and identified as such (in red), we can still expect a result of this type (Simulation 3c: The tree which hides the entire forest).

Despite the fact that people identified as infected self-isolate and are out of the dance, the virus keeps spreading through invisible transmission. The appearance of new confirmed cases is also harder to understand and to anticipate because they seem to emerge at random, without any link with one another. Isolating confirmed cases is therefore not enough, if it doesn’t also include comprehensive testing campaigns to better identify the invisible population of unaware carriers, who are potentially significant in number and very active in the spread of the virus.